This is Best Tourist Places in the Dominican Republic

We show you the ten best tourist places in the Dominican Republic, a country with an impressive diversity of scenarios, where colonial jewels, natural wonders and paradisiacal beaches are hidden. Check the list below!
1- Colonial City of Santo Domingo:
Located in the heart of the capital of the Dominican Republic , on the edge of the Ozama River, it corresponds to the first city founded by Europeans in America, with centuries-old alleys and monuments that date back to the main episodes of the colonial era, including the first Cathedral and the first fortress built in the New World.
Today declared a World Heritage Site by UNESCO, in addition to offering a trip to the past, it has an attractive urban life, with numerous bars, shops and restaurants, forming a perfect harmony between the old and the present. Leaving the Colonial City, you can also enjoy the other tourist attractions of Santo Domingo , among which are natural wonders such as Los Tres Ojos National Park. 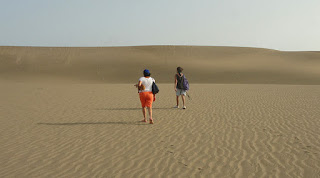 
Located on the Las Calderas Peninsula, they correspond to one of the best tourist places in the Dominican Republic for nature lovers, a magnificent setting made up of an immense sand desert that stretches for about 15 kilometers long and 3 kilometers wide, with huge dunes that reach 35 meters high.


Located on the Las Calderas Peninsula, they correspond to one of the best tourist places in the Dominican Republic for nature lovers, a magnificent setting made up of an immense sand desert that stretches for about 15 kilometers long and 3 kilometers wide, with huge dunes that reach 35 meters high.

They complement the landscape, the native flora of the place, made up of endemic species such as olives and cambron, along with the calm waters of the Bay of Las Calderas, as a backdrop. A short distance from the Bani Dunes, is Punta Salinas, an ideal beach to cool off, or to practice windsurfing and kitesurfing. Rincon Beach on the Samana Peninsula. DC. Pierremangin via Flickr.

This peninsula located at the northeast end of the country, gathers in its approximately 60 kilometers long and 19 wide, some of the most beautiful beaches and ecotourism destinations in the Dominican Republic, with landscapes characteristic for its subtropical humid forests and green mountains.

Among its many tourist sites, the Limón Waterfall stands out with its 30-meter waterfall and the beautiful beaches of Las Terrenas, Rincon and Cayo Levantado. Also between January and March, it is possible to admire the spectacle that humpback whales provide, which go to Samaná Bay to reproduce. The Haitises DC. Via Wikimedia Commons by Anton Bielousov.

Located at the foot of the Bay of Samana, corresponds to another of the natural jewels of the Dominican Republic, a national park of 1,600 square kilometers, famous for its set of hills or “mogotes” that reach heights of up to 40 meters, covered by lush tropical forests.

The landscape of Los Haitises, also includes small bays, virgin beaches, keys and mangroves, which make home to an impressive biodiversity of species, in addition to numerous natural caves, where the Taíno culture left pictographs and petroglyphs. The entrance to the park is usually made by the coastal town of Sabana de la Mar, from where boats leave, which run through the main sites of Los Haitises. Bavaro Beach in Punta Cana. CC. Via Flickr from Sarah_Ackerman.

With its 50 kilometers of paradisiacal beaches, Punta Cana is undoubtedly one of the most famous tourist places in the Dominican Republic, as well as one of the most legendary in the Caribbean , with beaches recognized for its crystal clear waters, white sands and huge coconut trees, as well as host exclusive golf courses, luxurious hotel complexes and all-inclusive resorts.

Although Punta Cana is spoken of as a single destination, it is actually made up of several beaches, being the most famous Bavaro beach, with an inexhaustible offer of tourist services and recreational activities. Next to it, there are other beautiful beaches such as Juanillo, Macao and Uvero Alto. Located at the foot of the Atlantic Ocean, it corresponds to one of the most beautiful cities in the country, combining beaches, history and modernity, as well as a vast range of tourist services, including numerous hotels, restaurants, lively nightlife and shopping centers.

Among its many tourist attractions, its famous cable car stands out, which, in a 800-meter route, ascends to Christ the Redeemer on Isabel de Torres Mountain, forming the typical postcard of the city. Other attractions are its historic Victorian center, its promenade that ends in the old Fortress of San Felipe and beautiful beaches such as Playa Dorada. Although they are only 10 kilometers from San Felipe de Puerto Plata, they correspond to a tourist destination in itself, comprising a set of 27 jumps of various sizes, born from the Damajagua River, forming in its passage springs and natural pools in between forest.

The landscape that surrounds this natural wonder, is another of its attractions, with virgin forest areas and mountainous areas that make home to a varied native flora and fauna. Normally the excursions to the place, include a circuit of ascent through walks and a descent through natural slides, sliding between the puddles. Located on the shores of the Caribbean Sea, it corresponds to an old fishing village, today mainly dedicated to tourism, benefiting from its privileged geographical location as a gateway to the Eastern National Park and its beautiful white sand beaches and turquoise waters.

In addition Bayahibe is considered one of the best tourist places in Dominican Republic for diving enthusiasts, with seabed noted for its transparency and biodiversity. In the surroundings of Bayahibe, numerous sites of interest are located, such as Catalina Island, Saona Island or the picturesque village Altos de Chavón, the latter built in 1976, evoking a medieval Italian city.

Located off the coast of Bayahibe, within the Cotubanamá National Park, it corresponds to one of the largest islands in the Dominican Republic, famous for its dream beaches, where white sands, turquoise waters and coral reefs combine. The most famous among them is Canto de Agua.

Saona also has several archaeological sites and caves of the Taino culture, such as Cotubanamá. A few meters from the coast, one of its most famous attractions, is the so-called natural pool, where it is possible to dive into sea beds that stand out for their transparency and biodiversity, with countless species such as sea stars.

Finishing the ranking of the best tourist places in the Dominican Republic, is this wonderful bay that is part of the Jaragua National Park, known for its kilometers of virgin beaches surrounded by gigantic rocks, with white sands and transparent waters, considered among the most crystalline of the planet.

Its seabed, meanwhile, is home to an extraordinary biodiversity of species, as well as impressive coral reefs, ranked among the best preserved in the Caribbean. The surroundings of the bay are made up of the arid landscapes of the park, where there are also numerous caverns that preserve pictographs and petroglyphs of pre-Hispanic cultures.
Felix October 24, 2019 Komentar